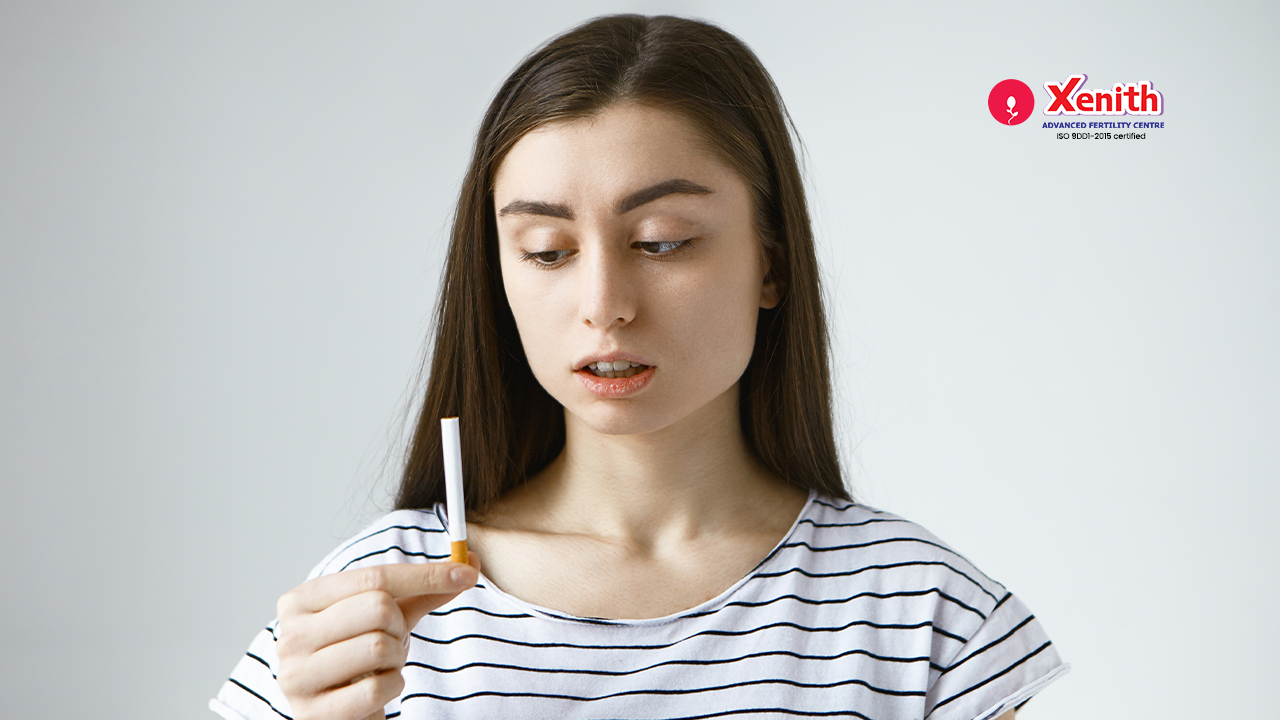 Cigarette smoking has been associated with many health risks impacting respiratory and cardiovascular health.

While there are 600 ingredients that can be used in cigarettes, when burned, they produce over 7,000 chemical compounds of which at least 69 are carcinogenic1.  The three major ingredients of a cigarette are tar (which coats your lungs), nicotine (which is highly addictive, causes a rush of adrenaline and makes you feel less hungry) and carbon monoxide (which is a by-product of burning cigarettes and is highly poisonous because it tries to replace oxygen).

Smoking affects fertility in both men and women. Here’s how.

Effects of smoking on men

A study found that cigarette smokers had lower semen volumes, sperm counts and motility as well as DNA damage in sperm compared to men who did not smoke.  Also, it was found that it is dose dependent or it gets more worse the more cigarettes you smoke per day.  The study found that men who smoked more than 20 cigarettes per day had a 19% decrease in sperm concentration compared with non-smokers.2-3  Many other studies have also found similar results.  Smoking may also reduce the success of assisted reproduction techniques such as in vitro fertilization (IVF) and intracytoplasmic sperm injection (ICSI).

Paternal smoking could also expose the mother to second hand smoke which can also in turn affect her fertility.4 Second hand smoke is the smoke that one exhales as well as the smoke made by the lit cigarette.  Second hand smoke has more than 4,000 irritants, toxins and substances that cause cancer.  Since lot of the second-hand smoke is invisible and odourless, it can still affect the people around you to breathe in all these toxins.

Smoking can also cause erectile dysfunction which is defined as the inability to maintain an erection for sexual performance. Cigarette smoke affects the blood flow needed for an erection, and smoking interferes with the healthy function of blood vessels in erectile tissue.5

Effects of smoking on women

Women who smoke don’t conceive as quickly and infertility rates are about double in smokers as compared to non-smokers.  When conception does occur, the likelihood of giving birth to a low-birth weight baby is higher for smokers. Smoking before and during pregnancy also increases miscarriage rates as well as birth defect rates (like Down syndrome), as smoking increases the chance for an egg to have chromosomal abnormalities.

Fertility treatments like IVF are still not able to bypass the effects of smoking.  Women undergoing assisted reproduction treatment and who smoked during their treatment cycle had approximately a 50% reduction in implantation rate of the embryo in the uterus and ongoing pregnancy rate compared with women who had never smoked.6 Female smokers need more ovary-stimulating medications during IVF and still have fewer eggs at retrieval time.

They also found that increasing the number of cigarettes smoked per day led to more issues with fertility.

Chemicals in cigarette smoke can also speed up the number of eggs lost and since each woman is born with only a limited number of eggs, they cannot be replaced.  Due to this, menopause can occur 1 to 4 years earlier in women who smoke compared with non-smokers leading to a smaller window of opportunity for conception.7

Ectopic pregnancies and preterm labor can also occur more often among female smokers. Ectopic pregnancy is a condition in which the fertilized egg fails to move to the uterus for implantation and instead attaches to other organs outside the womb leading to fetal death and puts the mother at high risk.  Each stage of reproductive function is targeted by components of cigarette smoke:

Smokers vs. non-smokers: However, women who quit smoking before their treatment cycle had the same pregnancy rate as non-smokers. This is why some health professionals recommend you try to stop smoking about two to three months before trying to conceive to get the full benefits of quitting.  For optimal results for conception,  it is recommended that you have a cigarette smoking cessation plan and cut out smoking from your life. If you need help with how to do this or what to do, please feel free to contact the fertility specialists in Pune at Xenith Advanced Fertility Clinic – either at our centre in Wakad or Koregaon Park.