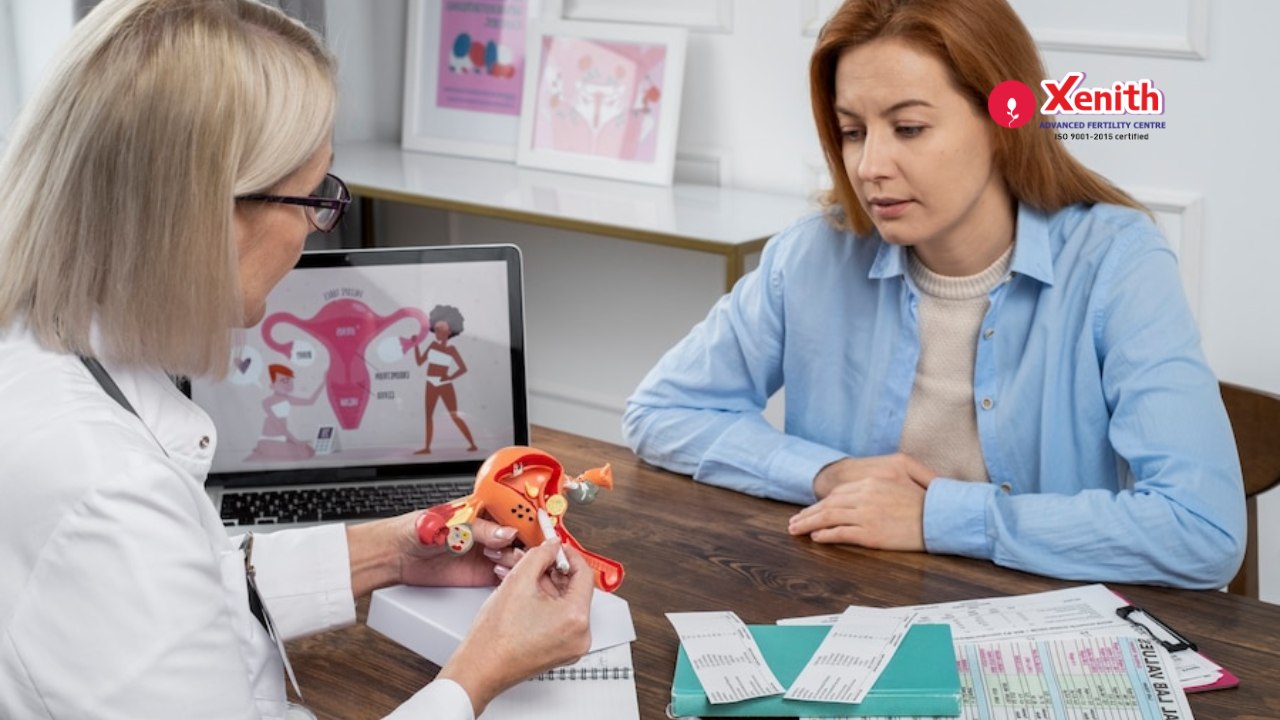 Ovarian cysts are fluid filled sacs inside the ovary or on the ovary. They are fairly common in women and they occur naturally.  Most women who have ovarian cysts don’t even know that they have them and it doesn’t affect your health or your ability to conceive because they develop and resolve on their own most of the time.  Its size can range anywhere from a very tiny pea to larger than an orange.

There are different types of cysts and they can be classified as either functional or pathological cysts.

Most people with ovarian cysts have no symptoms although some might have some abdominal pain or swelling, issues with urination or having sex, irregular periods, or feeling tired.  Some ovarian cysts can grow large and apply pressure to the organs around it like the urinary bladder or they may burst and spill their contents causing pain.  Sometimes large cysts can displace the ovary and cause it to twist causing ovarian torsion.  This can cut off blood supply to the ovaries causing pain, nausea and vomiting.  If that happens, surgery would be needed as soon as possible to prevent the ovary from dying. (1)  The cysts can be viewed by pelvic examination, ultrasound, minimally invasive surgery or by CT or MRI scans.  They could also test for presence of certain markers in the blood to test for ovarian cancer, endometriosis, or PCOS.

Sometimes cysts are detected during pregnancy and that’s okay as long as the cyst is non-cancerous and is monitored routinely since most of them will go away on its own.  Some cysts might continue to grow during pregnancy and might cause some pain.  Even then, they don’t cause any problems for the pregnancy although it’s important to have it monitored routinely.  Even if a cyst ruptures, the fluid from the cyst will reabsorb on its own with time, and all that is needed is some medication to manage any discomfort and pelvic rest for a few days. If there is sudden abdominal pain along with fever, vaginal bleeding, vomiting or if there’s a feeling of weakness or having cold, clammy skin, it’s time to call the doctor.  In the case of the large cyst, not decreasing in size for several weeks, surgical removal might be recommended by the doctor.  The operation is not dangerous for the mother and child, especially if it is carried out before the middle of the second trimester.

Treatment depends on the risk it poses and if there is a lot of discomfort or pain.

The first approach when a cyst is initially discovered is to monitor it routinely to see if the cyst is disintegrating on its own or if its growing in size. Sometimes the doctor might put you on birth control pills to prevent more cysts from forming although it cannot shrink an existing cyst.   If the cyst grows too large to cause pain or might have the potential to rupture, then it could be removed surgically.  Surgery could be carried out laparoscopically where a small keyhole incision is done to remove the cyst or it could be done as a laparotomy where a larger cut in the abdominal area is done to remove larger cysts or if it’s cancerous.  In rare instances, the ovary itself might need to be removed. There is no way to prevent ovarian cysts from forming. However, regular pelvic exams can ensure they can be detected as early as possible. Changes in the menstrual cycles and unusual symptoms that persist for many cycles should be reported to the doctor.  Make sure you visit a qualified, knowledgeable team for checkup and testing.  The professionals at Xenith Advanced Health Centre are well versed about ovarian cysts and would love to help you overcome any hurdles in order to have a healthy baby and mom.