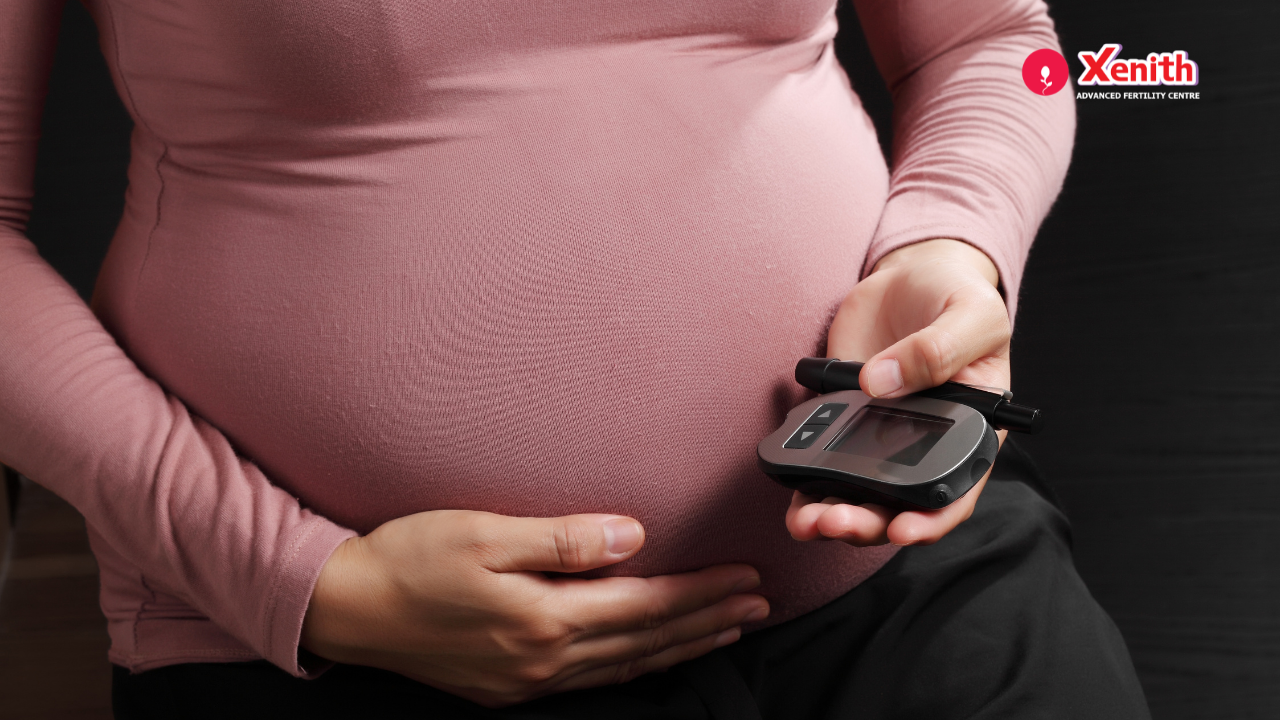 The idea of having diabetes might send a sense of alarm about the long term consequences of having a lifelong condition and how to cope with it.  Diabetes is a chronic disorder when the blood sugar levels are too high in the body.  The carbohydrates in the food that we eat is broken down into glucose by the body and this is released into the bloodstream.  An increase in blood sugar levels signals the pancreas to release insulin which then allows the blood sugar to pass into the body’s cells for use as energy.  In diabetics, the body doesn’t make enough insulin or the body doesn’t use insulin properly causing the blood sugar levels to remain high which in turn over long term can lead to health problems like heart disease, vision loss and kidney disease.

What is gestational diabetes

In gestational diabetes, pregnant women become diabetic usually around week 24 and 28 although it could happen earlier too.  This is usually resolved after the baby is born.  Changes in hormone levels during pregnancy as well as other changes such as weight gain causes insulin to be used less effectively.  This condition which is called insulin resistance increases the body’s need for insulin leading to gestational diabetes.

Many pregnant women have little or no signs of gestational diabetes.  This is why the doctors routinely check for it between the 24th and 28th week of pregnancy.  Some women might have some symptoms like excessive thirst, sweating, fatigue, being overweight and frequent urination.  But often these symptoms are similar to pregnancy symptoms and thus might get missed.

When testing for pregnancy is done, they usually also screen for diabetes initially.  The oral glucose tolerance test (OGTT) is also done between 24 to 28 weeks during pregnancy to test for gestational diabetes.  Fasting needs to be done for 10 hours usually overnight followed by a blood test.  Then a  glucose drink is given followed by more blood tests after 1 and 2 hours.  Results of high blood glucose levels could mean you have insulin resistance and your body might not be able to deal with the extra demand for insulin.

Gestational diabetes cannot be prevented but can be managed well with following a healthy, balanced diet and regular exercise.  However, medication might be needed if the sugar level is still not under control after following a healthy diet and exercise.  If possible, try to lose the excess weight before becoming pregnant.  Eat some protein in every meal and eat lots of fresh fruits and vegetables.  Try to eat spread out and manage your carbohydrate intake of foods like potato, bread, and rice throughout the day so that there is no sudden spike in sugar levels.  Also avoid processed, sugary, and baked foods.   Make sure you eat at scheduled times and eat smaller quantities of food more often.  Stop smoking as well as drinking alcohol.  Check your blood sugar routinely to make sure they are within the normal range.  Include foods high in calcium, folic acid, iron and fiber.  Doing regular moderate exercise of 30 minutes daily like a brisk walk can help to lower the blood sugar.  Check with your doctor about how much exercise you can do and how to follow a healthy diet.

If you’re at higher risk for gestational diabetes, your doctor may test you earlier. Also, check your blood sugar levels after 6 to 12 weeks after delivery and then every 1 to 3 years to make sure the levels have returned to normal.  The baby will have to be tested for blood glucose levels immediately after birth and monitored regularly because it might be too low.  So the baby needs to be fed soon after birth to keep the blood sugars at normal levels.

If gestational diabetes isn’t properly managed, it could lead to premature delivery, excessive birth weight in baby, low blood sugar in baby, breathing difficulties in baby, high blood pressure due to mother having preeclampsia, and higher risk of future diabetes in both baby and mother.  The increased insulin produced in response to high glucose levels converts excess sugar to fat leading to a child with excessive weight and the mother might have to deliver via cesarean section. Also, the high blood sugar levels in the mother especially just before delivery could cause over consumption of the baby’s insulin in turn leading to low blood sugar levels in the baby’s blood.  High blood sugar in the mother could lead to early labour which could lead to respiratory distress of the baby.

What if you already have diabetes and have become pregnant

If you already are diabetic and want to plan to have a baby, you should try to get your blood glucose levels close to your normal limits before you get pregnant because it is considered to be a high risk pregnancy.

Having high blood glucose during the first weeks of pregnancy could harm your baby, even before you know you are pregnant. So, you should see your doctor as soon as possible so that you can have a healthy pregnancy.  During the first 8 weeks of pregnancy, a baby’s organs like the brain, heart, kidneys and lungs begin forming and high blood glucose levels during this time could be harmful because there is a higher chance of birth defects and miscarriage.  You may need to scrutinize how and what you eat as well as do regular exercise and make sure you take any medications or insulin on time.  Discuss with your doctor about any possible effects of the medications you are taking on your pregnancy.  Issues due to chronic diabetes like eye or kidney problems could worsen due to pregnancy if your blood sugar levels are too high.  Serious issues may occur if you develop preeclampsia when you have high blood pressure and there’s too much protein in your urine during your pregnancy.  If you have preeclampsia after 37 weeks of pregnancy, the doctor may recommend you deliver your baby early.  If it’s before 37 weeks, your doctor may look at various options and keep a close eye on you, to keep you and your baby healthy as long as they can before delivery. Make sure you get routine checkups done also.  Make sure you take any vitamins as per your doctor’s instructions which also can help you and your baby stay healthy.Getting checkups before and during pregnancy, following your diabetes friendly diet, being physically active, and taking the proper diabetes medications, will help you manage and keep your gestational diabetes in check.  If you have any questions about gestational diabetes, feel free to contact the experts at Xenith Advanced Fertility Centre.